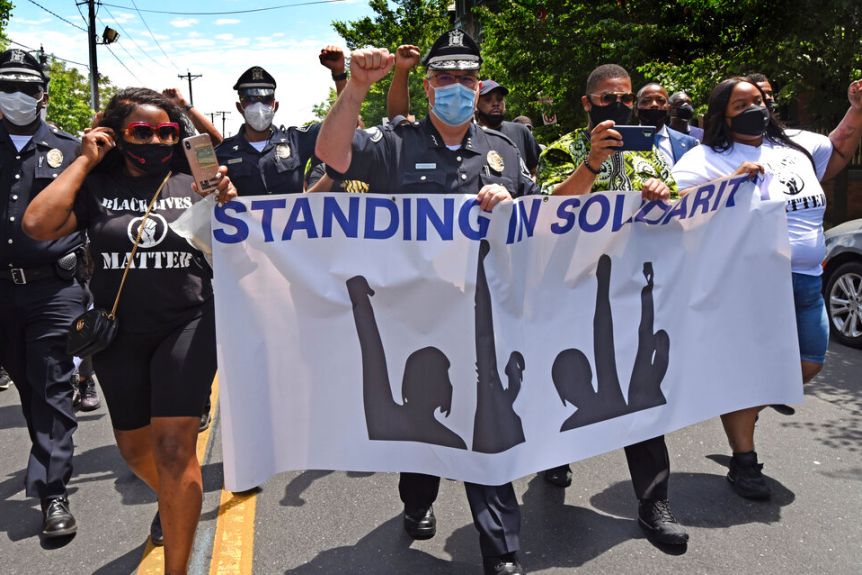 “This macho business culture restricts me. I can’t be myself at work. I dedicate more energy than I like to admit just fitting myself into this box so I can do my job.”

“Yeah, just think of how much more we could give to our jobs if we weren’t having to pay so much attention to fitting into the boys’ club.”

My boss had assigned me to facilitate the diversity and inclusion workshops that were part of a companywide initiative. The initiative was a huge success, a cultural transformation, and a game changer for many of us.

So what does a D&I workshop in 1995 have to do with the hope I feel from the powerful and sustained protests demanding social change? On the surface, I admit, very little, but hear me out.

We tend to think of people in demographic groups as being the same. It’s a bad habit of humans.

Let’s look at that workshop as an example. Since the group with the most privilege in American culture was white, straight, and male, I was surprised and enlightened to learn that they didn’t all think the culture was just dandy and in need of no change.

However, the pressure on them to retain the status quo of the culture, even though it didn’t really bring out the best in them, was powerful. Each of these three men were in roles requiring  frequent interaction with men outside of the company, and they were all well respected in their roles. They each had to turn on a fake self to be viewed favorably by men at other companies and even to some extent at our company, because we still had work to do to be fully inclusive.

Culture change isn’t just about laws. It’s about changing hearts and minds to welcome and include people who are diverse in ways both obvious and subtle.

After all, we had plenty of laws in 1995. We have quite a few of them today. The laws that existed in 1995 didn’t magically create an inclusive culture at the company where I worked, and today’s laws haven’t given people of color a level playing field with white people. In order to change a culture, you have to not just ensure that the laws or rules are fair, you must also change what people believe in their hearts.

And of equal importance, you need advocates from inside the privileged group with changed hearts, because those changed hearts and minds move on to change the system that is unequal.

You can’t make inequity and exclusion all about villains being on one side and angels on the other, because it doesn’t move change forward. I wrote about this in a blog featuring Martin Luther King’s attorney and one of his key strategists, Clarence B. Jones.

This brings me to a reason I feel hopeful for the first time in a very long time.

Notice who is marching against police brutality in this image from Camden, New Jersey: cops. When enough people of all races stood up and said this was deplorable and the system had to change, it started to crack the unquestioning so-called brotherhood that hid this criminal behavior.

I am hopeful because I see police officers speaking out against the brutality, in much the same way that I saw these businessmen begin to speak up about the culture during my workshop, even though they knew it could mean that other men would think less of them and exclude them.

We business people are not so different from the cops. The good and the bad can both be brought out in us. So now we see the cracks in the toxic shell. We see cops willing to take a huge personal risk to march against those who use excessive force, and the massive systemic racism that underlies it. That’s a big step.

The courage and tenacity of the protesters, including those from within the police force, have the very real potential to trigger the greatest and most constructive change of our lifetimes. And that’s one reason I’m hopeful for the first time in a long time.

How do you feel? Do you know how to talk with your team about inclusion, bias, and systemic inequality? It’s on their minds. You need to talk about it. Reach out to me if you’d like to explore how to have this conversation.