Lessons from Clarence B. Jones 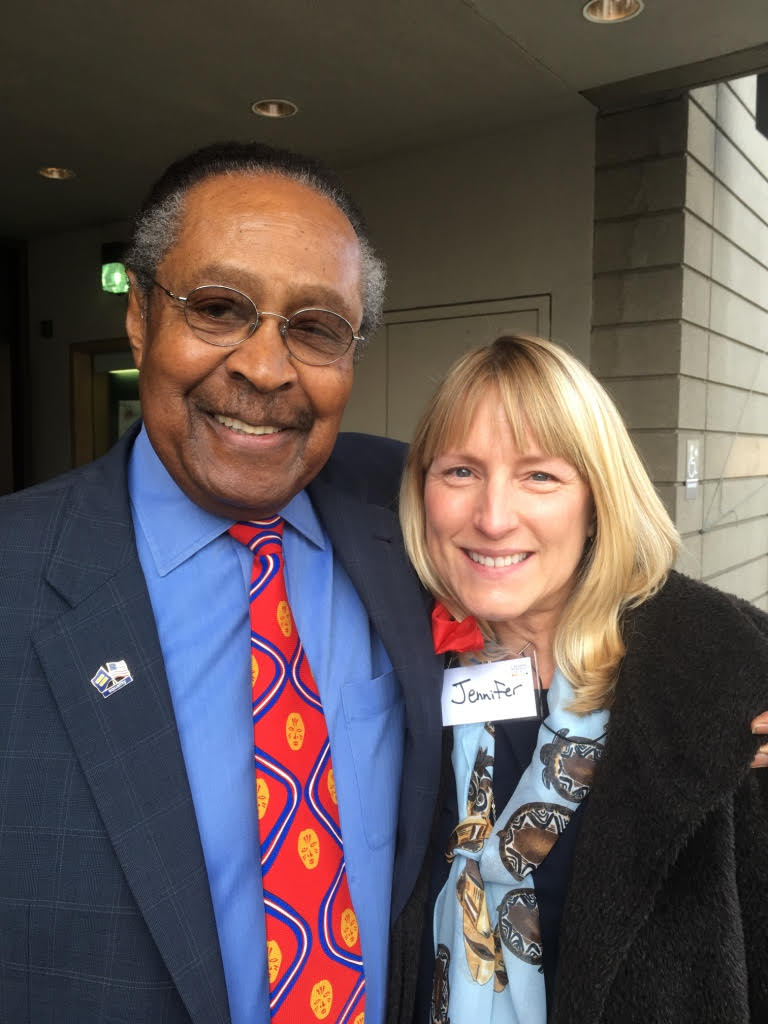 22 Nov Lessons from Clarence B. Jones

Have you ever struggled with the politics involved in creating change?

In the picture with me is Clarence B. Jones, attorney, strategic advisor, and speechwriter for Dr. Martin Luther King. Among his many achievements and contributions, he assisted King with his iconic speech, I Have a Dream.

Kirk and I met Dr. Jones on November 6, when he gave a talk at Calvary Presbyterian Church in San Francisco. His subject was Waging Peace in a Violent World.

I suppose I expected an idealist’s inspiring sermon, but of course, Dr. Jones is an attorney, strategist, and former Wall Street executive. His perspective involves painful but important realities about large scale, transformative change, realities that we may want to ignore, but that we ignore at our peril.

Here are three of his key points, along with some thoughts about applying them to changes you wish to make.

It’s natural to believe that someone more powerful than you is your enemy. When he first began advising MLK, Dr. Jones viewed white men as the enemy. Friends and enemies, however, are not guaranteed for life.

What are your interests?

You will not prevail unless the powerful majority sees that what you want is also in their interests.

It’s not enough to be right in principal or right on moral grounds. Change will happen when they see that their interests will also be served.

How do your ideas serve the powerful majority’s interests, not just your own team’s interests? Who stands to lose face, lose power, or lose money if your ideas are implemented? What can you offer? How can you align your idea with their interests?

For example, after working with a client and his direct reports over several weeks, I concluded that one of his VP’s was never going to get in alignment with the business strategy. He was also never going to believe that he should report to my client, because he thought he should be the GM himself.

The VP was very close to the COO and had been for the past decade. This is a classic political powder keg, a powerful and non-aligned leadership team member who has the ear of the boss’s boss and refuses to get on board with the rest of the team.

The client agreed with my perspective. It echoed his own.

So what did he do? How did he handle this constant threat to his success?

My client could have chosen to follow accepted processes to try to obliterate the guy and get his BU aligned. Had he followed proper nine-box talent matrix methodology, for example, he would have marked the guy as high potential but low performing because of his poor teamwork.

He didn’t. Instead, he searched for a way to get the VP’s interests aligned with his own, by finding a better-fit opportunity for him elsewhere – heading a newly-formed BU — instead of fighting a protracted political war that put the BU at risk.

You might be thinking, “But that’s not fair! The VP was rewarded for bad behavior!” You’re right. Sometimes the best outcome involves someone getting what they want, even though they don’t deserve it.

You must identify the strongest ally from the powerful majority and make him or her a leader in your cause.

Martin Luther King and his closest advisors came to the conclusion that only a powerful white man from the South would have the credibility with the white majority (over 85% of the population at that time) to push their movement forward. He was right. Civil rights were not enacted into law until Lyndon B. Johnson signed the Civil Rights Act in 1964.

Imagine what it must have been like for them to realize that as the leaders of their own movement, they would never “be enough” to drive forward the transformative change they envisioned. What must it have been like to see that their ally was someone who had voted against every civil rights bill from 1937 to 1956, and who held racist beliefs even as he drove forward the Civil Rights Act?

Who are your prospective strong allies?

Sometimes your prospective strongest ally is a person you like and respect. That makes for a great day, week, month and year at work, doesn’t it?

Sometimes, however, the prospective strongest ally is a person you don’t like or don’t respect. In these situations, let your purpose and the relative importance of your goals and commitments drive your decisions. You may decide to hold your nose and form the alliance for the greater good after all.

Dr. Jones had a goal that to him was worth the alliances he made, however difficult those relationships proved to be.